The best way to protect your baby against whooping cough is to immunise them on time.

A doctor at Starship Children's Hospital talks about a baby with whooping cough in Starship's Intensive Care Unit. At the time of filming in 2012, the baby was 8 weeks old and had been seriously ill in hospital for about 6 weeks. See the transcript. 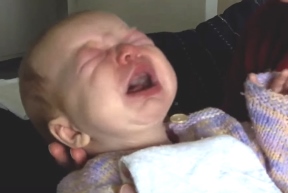 For information about the disease, see the whooping cough page on this website.

How do babies catch whooping cough?

Mackenzie was just 7 weeks old when she became ill with whooping cough, early in 2012. She was admitted to hospital where she spent 10 days in isolation. Mackenzie's Mum, Anna Gibson, says they are pretty sure Mackenzie's Dad gave her whooping cough but it was too late by the time they realised he had it. Mackenzie has fully recovered now but Anna wants to tell her story so that other parents don't have to go through the same experience. See the transcript.

How can I protect my baby from whooping cough?

Immunisation is the best way to protect your baby against whooping cough. Immunised babies: 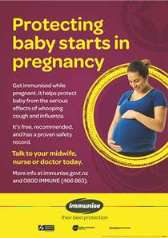 Talk to your midwife or family doctor about having whooping cough immunisation before your baby is born.

Immunise your baby on time

Young babies are most at risk of getting very sick from whooping cough so it is important to:

Immunise your other children and family members

Encourage your family members to ask their family doctor about a whooping cough booster before your baby is born.

Parents or older children in the family with whooping cough can easily pass it on to babies who are too young to have fully completed their immunisation course. Make sure you, your older children, your baby's grandparents and extended family/whānau are up-to-date with immunisations. Encourage your family members to ask their family doctor about a whooping cough booster before your baby is born.

Immunity from both having had the disease naturally, and immunisation, decreases over time so children need booster doses for longer-term protection and to decrease the spread to vulnerable babies. Children should have booster doses at the following ages:

Whooping cough booster immunisations are also available for older children and adults who are at higher risk of catching the disease or in contact with young babies or other children at high risk. Ask your family doctor about this.

Does breastfeeding protect my baby from whooping cough?

Many parents are not aware that a baby is born with no maternal protection from whooping cough unless mother has had recent immunisation in pregnancy. While breastfeeding protects babies against many infections, it does not provide a baby with protection against whooping cough.

Can I delay immunising my baby against whooping cough?

See IMac's information on whooping cough. For questions on immunisation, vaccination-preventable diseases or a specific vaccine, you can contact IMAC. Call free on 0800 IMMUNE (0800 466863), weekdays 9am - 4.30pm.

Stories from the whooping cough outbreak that began in 2011 - several parents have come forward to share their experience of whooping cough and what happened when their babies caught the disease. 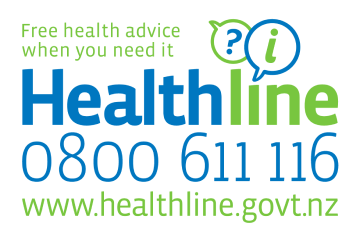 © The Paediatric Society of New Zealand and Starship Foundation 2005 - 2022
Printed on 26 January 2022. Content is regularly updated so please refer to www.kidshealth.org.nz for the most up-to-date version