What are the insulin basics?

What are the different types of insulin?

Insulin action and duration varies according to insulin type.

Ideally, give rapid acting insulins 15 minutes before eating. They tend to last between 2 and 4 hours. They are clear in appearance.

Short acting insulins have a peak action of 2 to 4 hours. So, ideally, give this injection at least 20 to 30 minutes before eating. It can last for up to 8 hours. They are also clear in appearance.

You usually take intermediate acting insulins once or twice a day to provide background insulin in conjunction with either rapid or short acting insulin. Their peak activity is between 4 and 12 hours but can last up to 24 hours. They are cloudy in appearance.

You take long acting insulin analogues either once or twice a day to provide background 'basal' insulin combined with either rapid acting or short acting insulin. Sometimes, they are also used in conjunction with intermediate acting insulin. They are clear in appearance.

Mixed insulins are a combination of intermediate acting insulin and either rapid or short acting insulin. You use mixed insulin less often for children and young people as it is difficult to adjust doses when the different types of insulin are mixed together.

How do I store insulin?

Store unopened vials and cartridges of insulin in the fridge between 2 and 8 degrees Celsius until their date of expiry.

You can keep insulin that has been opened for use at room temperature. Injections are more comfortable if the insulin is not cold.

Where on my child's body do I inject insulin?

Insulin needles are very small as you only need to inject insulin into the layer of fat under the skin (subcutaneously). Once injected, the insulin goes into the blood.

The main areas where children and young people can safely inject insulin are the stomach, and the upper, outer areas of the buttocks. The abdomen provides the fastest and most consistent rate of insulin absorption and is less affected by exercise than other sites. You can also use the fronts and/or sides of the thighs but these are less commonly used in children.

Buttocks often best for a younger child or baby, or a child who has lost a lot of weight

If your child has lost a lot of weight before their diabetes diagnosis, it is often best to inject into their buttocks. This is to make sure the injections are going into the fat layer and not the muscle layer. Injecting into buttocks is also often best if you have a younger child or baby. Lipohypertrophy is an abnormal accumulation of fat underneath the surface of the skin. It is a common problem when insulin is repeatedly injected into the same area and affects insulin absorption. You can avoid lipohypertrophy by rotating the injection sites.

How do I administer my child's insulin?

It is important to remember to wash hands to remove dirt or germs before injecting insulin.

Preparation varies according to your child's age and stage of development

Preparation for insulin injections will vary according to your child's age and stage of development. Young children, for example, may require distraction with bubbles.

Slight bleeding and bruising will happen sometimes because the needle has passed through a tiny blood vessel. This should not affect the absorption of the insulin but may cause stinging at the time of the injection.

Insulin injections should cause minimal discomfort. But, injections not given deeply enough into the fat layer may cause pain. Insulin given too deeply may go into the muscle which may also cause pain. Children who get used to having injections in the same area may complain that injections are more painful when they move sites. You can avoid this by encouraging your child to use various areas of the body from the time of diagnosis.

Talk to your specialist diabetes team

Please talk to your specialist diabetes team about a guideline for the safe administration of insulin for your particular child. This is because the administration technique may need to change as your child grows older and gets bigger.

You need to dispose of all needles in a sharps container.

What about the administration of insulin using a pump device?

An insulin pump constantly delivers basal insulin according to preprogrammed doses stored within the pump. By pressing buttons on the pump, you can adjust these programmes for different times of the day or during periods of increased activity, to deliver more or less basal insulin as required.

The insulin within the main pump unit is stored within an insulin reservoir. The reservoir connects to a thin piece of tubing. This tubing connects to a cannula inserted into the subcutaneous layer of fat, generally in the abdomen or buttock.

People using insulin pumps need to regularly look at blood glucose trends (minimum of 6 blood glucose tests each day) to work out if programmed insulin doses for both the basal and the bolus insulin are adequately meeting their needs.

How pumps can help prevent hypoglycaemia

Pumps are increasingly able to interact with continuous glucose monitoring devices. Used in this way, both pump options available in New Zealand can help prevent hypoglycaemia.

There are also specific criteria within New Zealand regarding eligibility for public funding for pump therapy.

Check the following leaflet for more information regarding the Starship Pump Programme and Pharmac criteria for funding eligibility. 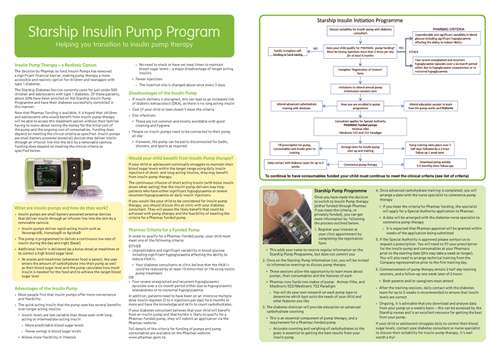 Check out KidsHealth's section on diabetes

The content on this page has been produced in collaboration with the National Clinical Network Children and Young People's Diabetes Services.

© The Paediatric Society of New Zealand and Starship Foundation 2005 - 2023
Printed on 02 February 2023. Content is regularly updated so please refer to www.kidshealth.org.nz for the most up-to-date version